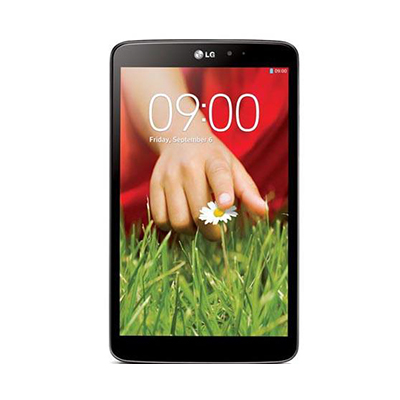 Sell Your LG
G Pad 8.3
Select Condition
Modify
Brand New
Like New
Good
Damaged
You can get up to:
$0
This is an estimated price.
Unfortunately, Your device has an estimated value of $0.We cannot offer you money for this item. Even though we can't pay you, we are still willing to help you recycle it responsibly and for free. If you are sure to continue recycling, Check out or Add to cart now.
Reset Selections>>

LG has been significantly absent from the tablet market in recent years, but it’s returned, and the Android-powered G Pad 8.3 is the first offering from the South Korean brand.

In what seems to be a conservative business move, LG’s G Pad is an entry-level tablet, and it’s aiming for success. The G Pad 8.3 will be replacing the Optimus Pad released in 2011. For those who don’t know, the Optimus Pad was the world’s first slate with a 3D camera; however, it fell short of Apple’s iPad 2.

The LG G Pad 8.3 appears to be a much superior product right away, with a more logical 8.3-inch screen size, superior build quality, and we’re delighted the Korean company has discarded the 3D camera – it was not use to most users after all.

Before we go any further, you should know that you can sell your LG G Pad 8.3 on Gizmogo. If you want to trade the old G Pad 8.3 for a better device, you can equally do that on Gizmogo.

Design info: LG has chosen a conservative design, but there is still an opportunity for some nice surprises. The tablet's front does not have any peculiar designs save for the LG design motif and a modest front-facing 1.3-megapixel camera.

The glass front flows into the edge of the tablet that is made of plastic. The choice of plastic on the border denotes LG’s commitment to being conservative. Interestingly, the back cover is mostly made of metal.

The back cover has two little indents for speakers, which might easily turn into dust traps because of the downward position.

The screen is sandwiched within a long narrow bezel, while the short bezel allows you to use the tablet in landscape mode without accidentally tapping anything.

On the right side, you will find the volume control and power switch. The controls are designed to control the cameras in different modes, allowing a smooth user experience.

If you check the top side of the chassis, you will find a headset jack and Micro-SD card slot covered by a hinged plastic. The Micro-USB 2.0 PC connection/charging connector is located at the other end.

Capacity info: LG equips the G Pad 8.3 with 16GB of internal storage. No thanks to boatload software and the OS; you can only access 11GB. There is an option to expand storage capacity via the microSD card slot, which supports up to 64 GB.

This memory is paired with 2GB RAM to produce dependable performance.

Size and weight info: The tablet measures 216.8mm by 126.5mm by 8.3mm. With this dimension, it is easy to slip into a bag or even a small purse or large pocket, while its 338g weight is relatively manageable.

Display info: The G Pad 8.3 comes with a Corning glass HD IPS touchscreen, boasting a resolution of 1,920x1,200 pixels and a pixel density of 273ppi. The display supports multi-pressured touch, meaning it is sharp and responsive.

You will enjoy watching movies and playing high-definition games on the G Pad 8.3. If you have an eye for detail, you may notice the dullness of the screen when displaying a swatch of white.

The G Pad does not have the brightest display on the block. You have to look towards the Nexus 7 for a commanding display.

Seeing that we are in 2021, the G Pad 8.3 and Nexus 7 are outdated. Newer and better generations of these devices have graced the market. You can sell your G Pad 8.3 to fund the purchase of a better device or swap it for another gadget on Gizmogo.

Chip info: Most of the LG G Pad 8.3’s specs are understandably mid-range. The device comes with a 1.7GHz quad-core Qualcomm Snapdragon 600 SoC and 2GB of RAM, whereas the high-end Galaxy TabPRO 8.4 features a faster 2.3GHz Snapdragon 800.

The image output of both cameras is subpar. The images have a lot of noise, especially indoors, and lack the sharpness, color density, and detail of even the most basic smartphone camera. The camera has nine photo modes, including panoramic, continuous shoot, time capture, and night modes.

As stated earlier, the volume key can be used to control the device in video mode. It can be used as a record button or the zoom key - and you can zoom in and out while shooting.

Battery info: Battery life is acceptable, with the tablet’s 4,600mAh cell working admirably in normal use. Whether you’re a moderate or heavy user, always carry your charger. You may need the mid-day recharge sooner than you think. O

The LG G Pad 8.3 will always be a good offering from LG. It may be old and phasing out in the US, but it is still useful to people in remote areas with low capital. That is why Gizmogo is focused on purchasing used G Pads for refurbishing and sale. Check out our deals to see the best fit.

There is an option to trade in your LG Pad 8.3 for another smartphone on Gizmogo. Be sure to follow the sale process to get an offer before choosing the device you want to swap for.

Otherwise, you can sell your LG Pad 8.3 for cash in 3 steps. Simply provide information about the condition of your Pad to get an offer, and afterward, you will be asked to ship for the final inspection.

Gizmogo does not trade stolen products. Also, we do not accept products that are not functional.