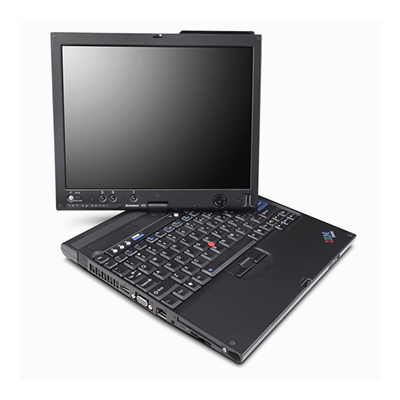 Sell Your Lenovo
ThinkPad X60
Select Condition
Modify
Brand New
Like New
Good
Damaged
You can get up to:
$0
This is an estimated price.
Unfortunately, Your device has an estimated value of $0.We cannot offer you money for this item. Even though we can't pay you, we are still willing to help you recycle it responsibly and for free. If you are sure to continue recycling, Check out or Add to cart now.
Reset Selections>>

The Lenovo X60, also known as the ThinkPad X60 Tablet, is marketed as a 12-inch ultra-portable laptop with a lot of functionality packed into a tiny size. It is thin and light and makes use of the IBM ThinkPad family of laptops, with an outstanding reputation. The design of this ThinkPad is somewhat utilitarian, and this is part of its global appeal.

A ThinkPad user can attest to its simple design, compactness, and entirely black color with no flashy embellishments. Among other things, it is fit for business operations, in the case of mobility. Aside from its very tiny size and professional appearance, the X60 does not draw undue attention in a business meeting. The machine was created with the perfect functionalist in mind.

The screen closes with a tight clasp, completely enclosing the keyboard. The metal hinges and axle can be seen, which makes the case easily closeable without wobbling. The casing is composed of black matte reinforced plastic, which shows fingerprints. The professional design and keyboard comfort make it the ideal laptop for many individuals.

Its been almost a decade since the launch of the ThinkPad X60. By 2021 standard, the device is outdated. If you still own a unit and are considering upgrading your device, consider selling or swapping for an upgrade on Gizmogo.

Design Info: The design of the X60 comes with some substantial modifications. A user could comfortably palm it while strolling around a convention exhibit floor, checking email, and performing one-handed typing chores. When the screen is locked and closed, it is kept down by a double latch, which ensures that it is firmly held down. The inbuilt hard disk is a 5400rpm SATA drive (60GB to 120GB).

The X60 includes a red mouse pointer nub in the centre of the keyboard. The X60 includes a biometric security device in the form of a tiny fingerprint reader in the bottom right corner of the LCD screen. This scanner is small and unobtrusive. When biometric security is enabled, it may be utilized for XP login as well as access to programs, files, and websites. This is an important security element in a world of theft push, where people need to be more cautious with their personal information.

The device has an internal speaker of 0.5W (mono). It also supports Microsoft DirectSound applications. It has three 1/8" audio jacks: one for external stereo speakers or headphones, one for an external microphone and one for line-in.

Capacity Info: The 1 GB of RAM on the ThinkPad X60 is a relatively small amount of memory, and it may not be sufficient for certain kinds of performance. However, this is not a problem. Users can add up to 4 GB of extra RAM. The primary memory may be expanded to a maximum of 4GB with ease. The current setup also allocates 512MB banks to both of the immediately available memory slots. As a result, upgrading necessitates the replacement of at least one of them.

Display info: The ThinkPad display features a native resolution that is perfectly suitable for basic office operations and web browsing. When used in Tablet mode, it gives an amazing feeling of fancifulness and comfort. The MultiTouch screen activates keys and moves windows using both the stylus and touch, so you don't have to take out the pen for fast interactions. In addition, the Active Rotate function has an integrated sensor that changes the screen orientation to fit the way you hold the Tablet. Both functions worked flawlessly and are unique features that may not be found anywhere else.

Camera info and Video Recording: The X60 does not have an integrated webcam, unlike many contemporary laptops on the market. The X60 also does not have a dedicated graphics card or a DVI video output.

Water-resistance info: This machine is not water-resistant. However, users are hopeful that future editions will come with this capacity.

Performance info: This system runs on Microsoft Windows Vista, loaded with 1.8-GHz Intel Core Duo and a graphic card. The Intel GMA 950 graphics card is installed in the notebook. This video card has limited performance and is only suitable for simple tasks such as office work and internet browsing.

Connection info: The ThinkPad is well catered for with a Gigabit Ethernet, Intel PRO/Wireless 3945ABG, and Bluetooth 2.0, which all work perfectly.

Battery info: This system has a stock four-cell battery sized up to 244mm (9.6in). The battery pack is rechargeable and charged with the system's ac adaptor. It might take as little as 2.5 hours to get a full charge and as much as 5 hours to reach full charge. When completely charged, it may last for around three hours.

Screen brightness, apps, features, power management, battery conditioning, and other consumer settings all affect battery life (and recharge durations). The time it takes to recharge varies based on the system mode. The length of time it takes to charge a device varies depending on the conditions. During high loads, the battery may not fully charge.

Would you like to trade your Lenovo ThinkPad X60? Are you looking for a place where you can trade-in your old gadget for a new one? If yes, visit Gizmogo to sell or swap your device. We provide an environmentally responsible service. We can purchase your old device and recycle it for future use.

We welcome trade-ins at Gizmogo! That means you visit our store and get a replacement for your Lenovo ThinkPad X60 right away.

You can also send in your old devices, and we will buy them at the best rate possible. This service comes with a free inspection and fast payout upon satisfactory conditions.