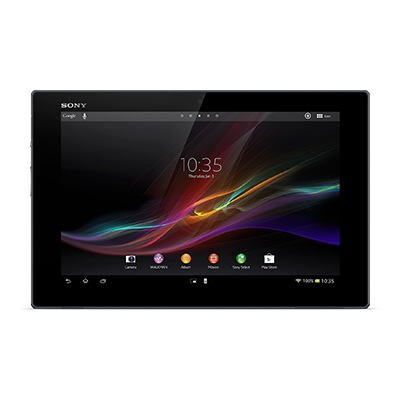 Sell Your Sony
Xperia Tablet Z
Select Capacity
Modify
16GB
32GB
You can get up to:
$0
This is an estimated price.
Unfortunately, Your device has an estimated value of $0.We cannot offer you money for this item. Even though we can't pay you, we are still willing to help you recycle it responsibly and for free. If you are sure to continue recycling, Check out or Add to cart now.
Reset Selections>>

The Sony Xperia Tablet Z was supposed to be the big break Sony needed to dominate the Android tablet market. Before the Xperia z, the Company had only released just three tablets- the Tablet S, Tablet P, and the Xperia Tablet S. All of these tablets were no match for the already existing tablets in the Android competitive tablet space.

The Sony Xperia Tablet Z was launched in February 2013, and it lived up to its expectations with its stunning features and design that superseded its predecessors. The tablet features an eye-popping HD screen display, excellent audio performance, lightweight yet solid build, expandable storage, fast processing speed, and unbeatable water-resistant features.

Upon its launch, it was retailed at $499.99 for the 16 GB Wi-Fi only version, the 32GB Wi-Fi version for $599.99, while the LTE 16GB version went for $699.99. If you are a thrifty spender, you would have considered putting a break on the built-up excitement that comes with purchasing the Xperia Tablet Z. Regardless, the Xperia Tablet Z, with its impeccable features, is one device that makes you feel instantly transfixed.

There has been a lot of "moving up in the Android tablet market since its launch in 2013, and if you were among the first purchasers of the Xperia Tablet Z, you should be bored by now. Luckily, there is a whole new world of tablets that offers far-reaching and unique features, and Gizmogo is the right place to begin your search. At Gizmogo, you can sell your Sony Xperia Tablet Z for cash at a premium value, and as an alternative, you can swap with a next-generation tablet that suits your immediate needs.

Design info: The Sony Xperia Tablet Z mimics the Xperia Z smartphone design, and both are based on the OminiBalance design philosophy. There are no fancy bells that should get you gushing over the moon, but its bold, black and angular styling is sleek and quite impressive to look at.

The tablet is very thin-In fact, Sony has claimed that the Xperia Tablet Z is the slimmest Android tablet that has ever been released. However, the lightweight materials and thin design of the Xperia Z did not compromise its build quality, as the tablet feels very sturdy when held in hand.

There is also an inch-wide bezel around the display that enables you to hold onto the tablet without nudging the touchscreen. The back of the tablet is covered with a soft matte black finish that offers a lot more grip, which as a downside, is tough to clean when it gets dirty. You will find gaps around the screen glass, around the plastic panel on the back, and around the plastic on the tablet's sides, which unfortunately traps in the dirt that is also hard to clean.

Still on the design, along the left edge is a prickly volume control rocker and right above the volume rocker is a circular silver power button that sticks out from the tablet's body. The tablet features 3 ports- the headphone jack, micro-USB, and a microSD card slot. These ports have removable covers protecting them to prevent water from getting into them quickly.

Have you been looking for where to sell your Sony Xperia Tablet Z for cash, or are you looking to swap it for another gadget? If yes, you can call us at Gizmogo for prompt service.

Display Info: The Xperia Tablet Z comes with a stunning TFT 10-inch display with a WUXGA resolution of 1920 x 1200 pixels at a pixel density of 224 pixels per inch(PPI) and a 16: 10 ratio. The screen produces rich and vivid colors, although you cannot compare its display quality to the Ipad Air and the Google Nexus 10; its features are still stunning.

Capacity Info: With the Sony Xperia Tablet Z, the 16 GB and the 32 GB version have a slight difference in price between the two. If you are a fan of movies and intend to use the Tablet Z for purely entertainment purposes, it comes with a MicroSD slot that offers up to 64 GB of memory support.

Weight Info: The Sony Xperia Tablet Z is widely known as the world's slimmest tablet, and there are no lies here! It weighs approximately 495 grams and measures 172.00 x 266.00 x 6.90mm (height x width x thickness).  At 495 grams, the Xperia Tablet Z is impressively lighter than the Google Nexus 10, making it super comfortable to hold in one hand for an extended period.

Water-resistance Info: You can consider the Sony Xperia Tablet Z as the perfect shower radio because of its unbeatable water-resistant feature. Sony claims that the tablet can be submerged in up to 3 feet of freshwater for up to 30 minutes without sustaining any damage. Except you are sold out on proving this claim wrong, there is no need to dunk your tablet in water, but it is rugged enough to withstand for an appreciable time without damage if you do.

Performance Info: The Sony Xperia Tablet Z comes with Qualcomm's 1.5GHz quad-core Snapdragon S4 Pro processor, and it comes with 2GB RAM for extra support. The operating system is Android 4.1.2, which is a little behind than most up-to-date Android tablets.

The Xperia Tablet Z moves around pretty fast with no sense of delay or lag when going through menus and apps in terms of processing speed. You are guaranteed the perfect gaming experience on the tablet, but you might hit some snag when scrolling quickly through graphics-heavy web pages.  Overall, in terms of performance, the Xperia Tablet Z is good but not a great performer, so your expectations should not go over the top.

Camera Info: The Sony Xperia Tablet Z sports an 8MP primary camera that can capture photos with a resolution of 3248 x 2432 and a 2.2MP front-facing camera. The primary camera comes with Sony's Exmor R Technology, allowing you to take good pictures even in low light. Both the primary and front camera of the tablet allows for FullHD videos at 1080p.

The camera comes with standard options like digital zoom, geo-tagging, exposure compensation, and white balance. Even with these options, the camera quality is not the best, but it gets the job done, so you might want to have a rethink if you are considering using the tablet in place of a real camera.

Audio Info: It comes with stereo speakers split across both lower corners of the tablet that sound pretty good for tablet speakers. For extra support, it comes with some sound enhancing technologies like the Clear Phase used to adjust the sound quality of the internal speakers.

Overall, the Xperia Tablet Z isn't the loudest device, but it still produces a fair output.

Battery Info: The Sony Xperia Tablet Z comes with a 6000 mAh non-removable battery, and the battery life is pretty good. It can average about 9 hours of reasonably regular use following a full charge. The only downside is that the Xperia Tablet Z is not a quick charging device.

If you want to sell your Sony Xperia Tablet Z for cash or you are hoping to make an upgrade, you can call us at Gizmogo. Over 1000 customers have trusted us, and so should you. We buy your devices for the best rate and recycle them, thereby saving the planet from e-waste. Call us today to begin.

At Gizmogo, you can come in and exchange your Xperia Tablet Z for another device listed on our website. First, log on to the Gizmogo website, browse through our catalog, and reach out to us with the details when you have made a selection.

Are you thinking of selling your Xperia Tablet Z for cash? If yes, you can count on Gizmogo! We offer free inspections and fast payouts within 24 hours of confirming the transaction to all our customers.