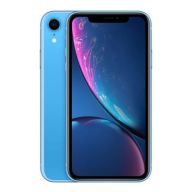 The sole purpose of the iPhone XR was to make a really good phone at an attractive price. To do that, Apple made some changes to their then flagship model the iPhone XS.

The XS traded in their OLED display for an LCD one. And they removed the dual-camera system for a single camera. Among other things, this afforded more people the opportunity to buy.

We’ll review some nifty cool features that Apple introduced with this phone. By the end of this review, you’ll have a solid foundation and understanding of the iPhone XR.

In other words: You won’t be able to see the stairlike-like lines on your graphics. Instead, it’ll be smooth as butter.

In comparison to Super HD Retina Display found on higher in models, the Liquid Retina display relies on LCD instead of OLED. As a result, the level of color and contrast doesn’t hit the same highs found on more expensive iPhones like the X and XS.

Like the iPhone 8-series, the iPhone XR has a glass front and back. The edges and the button of the phone are both made out of aluminum.

On one side, you’ll find two aluminum volume buttons and a ring/silent button. On the other side, theirs a wake-up button – although you can tap the screen to get the same effect. This side also has a SIM card tray.

There’s nothing on top but a solid piece of aluminum. And the bottom has a Lighting connector and built-in microphones and speakers.

When it comes to Apple’s flagship models vs. entry-level iPhones, the camera is the great divider. Don’t get me wrong. Both cameras are legit.

But let’s face it:

Two cameras are better than one. And don’t let me get started with three.

With the X-series family, the focus was not on improving the camera lens but rather on improving the smart features that drive them. Therefore, you’ll find improvements in Portrait Mode and Lighting, Smart HDR, and Faux Bokeh effect on all X-series phones.

The TrueDepth camera is located on the screen. It includes a set of sensors, a front-facing camera, and an IR camera that captures your face in 3D. All these components enable FaceID.

FaceID is a user authentication tool that replaced the fingerprint-based TouchID on previous iPhones. It uses machine learning techniques to take a three-dimensional capture of your face. Over time, it’ll learn your face. It doesn’t matter if you grow a beard, put on makeup, or change your hairdo. A12 will store your face within its Secure Enclave.

With your permission, TrueDepth can be used by third-parties apps for things like health diagnosis, sentiment analysis, and video game development. But Apple has banned apps for using your face for marketing or advertising purposes.

The whole point of FaceID is to make it effortless for you to unlock and lock your phone. With a simple glance, your iPhone is securely unlocked.

The iPhone XR runs an A12 Bionic chip. Back then, it was the fastest processor, which still very fast today. The XR and the XS have the same SoC design. So the performance is practically identical with little differences here and there. But there’s not enough difference to matter.

Performance improvements from the previous A11 Bionic to the A12 Bionic are very small – only 13%. That’s because Apple put its focus toward Neural Engine.

Although the CPU isn’t much faster, the A12 Bionic GPU is notably faster than its predecessor. The performance in the XR and XS has the same GPU performance. But because of the lower RAM, the XR slightly lagged at higher resolutions. But with a lower resolution, you can expect to have a better 3-D gaming experience compared to the XS.

But you should note that the XR had throttling issues at peak performance. Apple solved the overheating problem when they introduced the A13 Bionic in the iPhone 11-series. In any case, the XR GPU performance is still very good and better than other phones at this price range.

Battery life is among one of the top priorities for the user experience. Despite being smaller in size, the iPhone XR has significantly more battery life than the XS and even the XS MAX.

Considering that larger phones usually have more battery life, Apple did a fantastic job in making big gains in battery life. A huge jump from the previous year.

Sell your iPhone XR today for cash at Gizmogo.